This article about the Transvaal was adapted from the International Cyclopedia, published in 1889. It gives a glimpse of the condition of the Boer country just before the war with the British Empire. 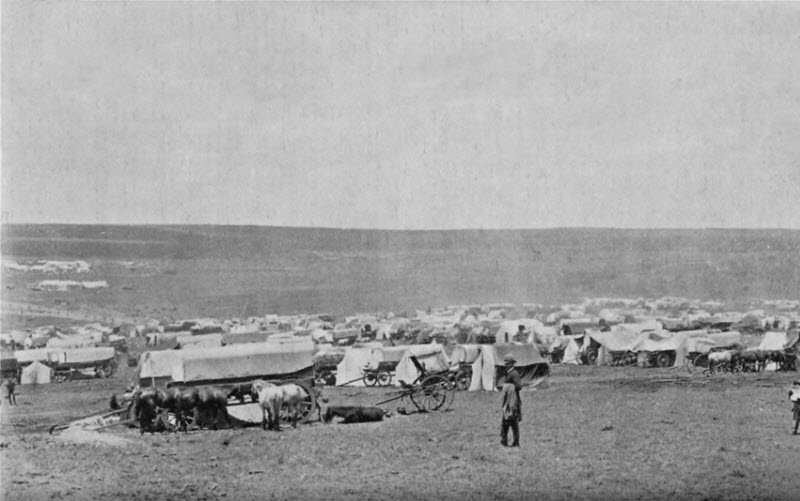 TRANSVAAL (i.e., "across the Vaal (river)"), now under the suzerainty of the British sovereign, in south east Africa, includes the country north of the Vaal river, and on both slopes of the Magaliesberg Cashan mountains, into which the emigrant Boers retired after the Annexation of the Orange River Free State, in 1848, to the British crown. Its limits lie between lat, 22 degrees and 27 degrees south, and longitude 25 degrees and 32 degrees east. The northern boundary of the Boer republic may be described as formed by the Oori or Limpopo river, here running nearly from West to East; its eastern, boundary by the continuation of the Drachenberg mountains, separating it from the coast-region, inhabited by the Zulus; on the s. it has the Vaal river from its source, dividing it from the Free State republic; while on the west, an undefined line separates it from the Betjuana tribes, still independent, living along the edge of the desert region of the Kalahari. Thus, an area of not less than 114,000 sq.m, was more or less under the control of the emigrant Boers, who were not very scrupulous in their dealings with the native tribes who lived, or live still, in the country they now occupy.

This region may be described in general terms as a vast plateau, sloping to the north, supported by the coast-line of mountains, which, presenting a bold mural buttress, or escarpment, to the low country at their feet, stretch away on their western flank into vast undulating plains. At right angles to the coast-range, another belt of very high lands, called the Magaliesberg, runs e. and w., forming a watershed between the river system of the Vaal or Orange and Limpopo rivers. The southern face of this range also presents long and undulating plains, generally well watered and wooded, and abounding with large game. To the n., as we approach the basin of the Limpopo, many high parallel chains of bills are met with, through narrow poorts or openings in which flow the many streams which form, further to the northwest, the Limpopo or Oori river, which is supposed to enter the ocean as the Sabia, in lat. 20° 48's., long. 34° 30' east. This point, however, is still one in dispute with African geographers. See Sotala. The rivers of the Transvaal region are more generally applicable for irrigating purposes than those of the Free State or Cape Colony in general, their channels not lying so deep below the general surface of the country.

The average height of the plateau inhabited by the emigrant farmers of European descent is from 4,000 to 5,000 feet. Many of the peaks of the mountain range traversing the plateau attain an elevation of 9,000 or 10,000 ft., and are covered with snow some months in the year. The altitude of the coast-line of mountains is considered at from 5,000 to 7,000 ft. above the low region at their feet. 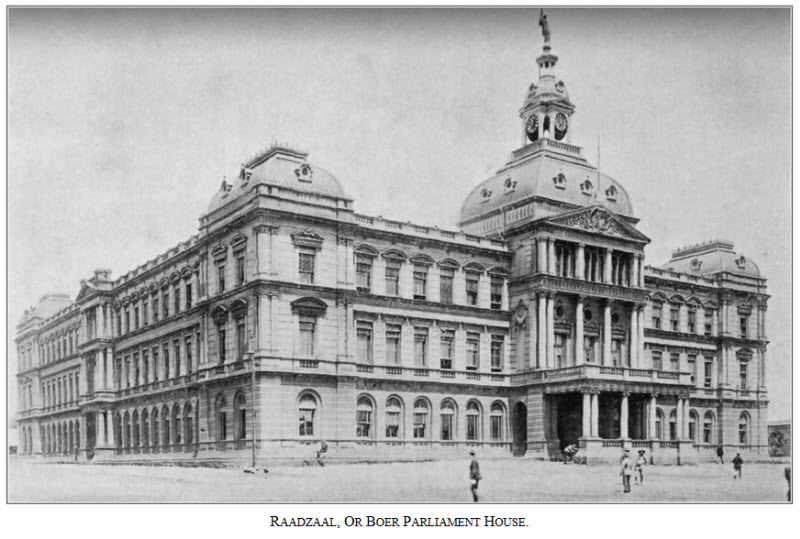 The principal towns are Mooiriverdorp, or Potschefstroom, on the Mooi river; Pretoria, about 100 m. n.e. of Potschefstroom, the seat of the local government; Leydenburg, 170 m. n.e. of Pretoria; Rustenberg, a few m. n. of the Magaliesberg; and Zoutpansberg, the most remote village inhabited by men of European descent in s. Africa, about 40 m. s. of the Limpopo river.

The population consists of emigrant farmers, and a mixture of deserters and foreign refugees from the Cape Colony and Natal. Their number is about 50,000 souls. Scattered through the country are numerous native tribes, in number about 775,000, whom the Boers have hitherto compelled to supply labor whenever required.

The republic was established in 1840, and recognized by Britain in 1859. The budget for the year ending Jan. 81, 1888, gave the revenue at £309,102. According to a treaty entered into between Portugal and the Transvaal republic, the latter enjoyed free transit of all goods through the Portuguese harbors on the e. coast; and in order to save the import dues levied by the colony of Natal, industrious efforts were made to secure direct access, by road and rail, to Delagoa bay. As this line passed through the dominions of an independent chief, the Boers were soon embroiled in desultory war with the latter. Their policy further provoked so intense excitement among the Boer inhabitants upon the frontier of the Cape Colony, and so seriously menaced the well-being of the British settlements, that Britain interfered, and ultimately, on April 12, 1877, annexed the territory of the republic. A large measure of local freedom is enjoyed by the Boers, and Dutch ranks with English as one of the two official languages. Chief exports -- ostrich feathers, wool, ivory, cattle, cereals, tobacco, etc.

With regard to the social aspect of the country, very marked progress has been made within the last few years. The large influx of Europeans and colonists of a more educated class than the original settlers, has produced very marked effects. The state church has been the Dutch Reformed, but all other creeds are tolerated.

The climate is generally healthy, although n. of the Magaliesberg its tropical nature begins to manifest itself. Hot winds and violent thunder-storms prevail in the summer months, The fly tsetse, whose bite is death to the bovine and equine species, abounds in many parts, and renders traveling with oxen and horses difficult.

The first diamond discovered in s. Africa was found in Oct., 1866, n. of the Vaal river, and since then diamond mining has been carried on with great success in that district. Diamonds have also been found in the districts of Marico, Waterberg, and Pretoria. Gold has been discovered in quartz reefs and alluvial deposits near Marabastad, 180 m. n. of Pretoria; also near Leydenburg, where mining is actively prosecuted; and the gold-bearing strata are supposed to extend for hundreds of m. in various directions. The country is also rich in other minerals, such as copper, lead, iron, tin, and coal.

TRANSVAAL (ante), was occupied by the Dutch Boers who left the Orange Free State after its annexation by the British in 1848. They established a republic which became prosperous: their independence was acknowledged by England in a treaty, 1852, and recognized by five European courts, also by the United States. But the English government, during the late Zulu war, annexed their territory to the British empire under the Cape Colonial government, 1877. The people protested, sent a commission to England to ask for justice, which was not allowed to present its case. They then took up arms to maintain their independence; 5,000 Boers took possession of Heidelberg in Transvaal, and re-established the republic, with Paul Kruger, president. Feb. 27, 1881, the Boers attacked the British forces on Majela mountain, and, after eight hours' severe fighting, drove them from their point. The Boers finally acknowledged the suzerainty of Great Britain, but were granted complete self-government. See Aylward's The Transvaal of To-day (1879); Silver's The Transvaal (1881).