The Orange Free State was an independent country established by the Boers. It was closely affiliated with the Transvaal Republic, also a Boer state. Together, the two republic were involved in a war with the entire British empire. The end result of the Boer War was the annexation of the republics to South Africa.

This article about The Orange Free State was adapted from the International Cyclopedia, published in 1889 and as such gives an accurate depiction of the area just before the outbreak of the Boer war with the British Empire.

The Orange River Free State is the name assumed by the republic of Dutch boers, who, after retiring from Natal when declared a British colony, established themselves in the country lying between the two great branches of the Orange river, the Ky Gariep and the Gariep, known to the colonists as the Vaal and Orange rivers, and separated from the coast region by the great chain of the Quathlamba, Maluti, and Drachenberg mountains. 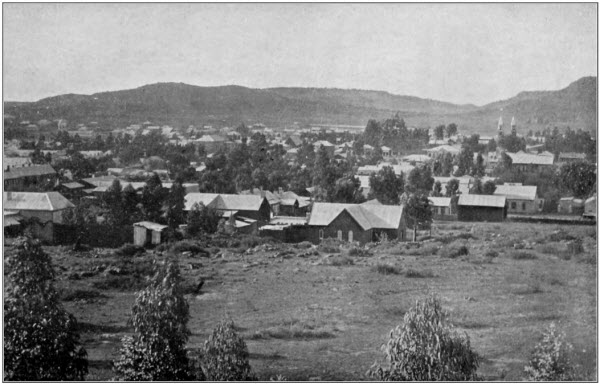 The City of Bloemfontain, Capital of the Boer Republic of the Orange Free State


The Orange River Free State forms a sort of connecting link between the Cape Colony, the Transvaal Territory, and Natal. It consists chiefly of vast undulating plains, which slope down from the Maluti mountains to the Vaal river, dotted over here and there with rocky hills, locally called “Kopjies,” although in the northern part hundreds of square miles are found with hardly a break on the horizon. It comprises an area of above 60,000 square miles.

When the emigrant Dutch boers took possession of this country, it was inhabited by different tribes of Betjouanas and Corannas, all of whom have been dispersed, except the powerful Basuto tribe, under the late chief Moshesh. The country is very rich in minerals; precious stones occur; coal is found everywhere, and iron, tin, copper, and lead are plentiful; besides plumbago, alum, saltpetre, ochre, and useful earths.

All the rivers of this region are affluents of either of the branches of the Gariep; amongst them may be named the Modder, Valsch, Great and Little Yet, which run into the Ky Gariep or Vaal river, and the Caledon, a considerable stream, which joins the Orange river after draining the Basuto country.

This region is a vast plateau, rising from 3,000 to 5,000 ft. above the sea-level, with very little wood, except along the lines of the water-courses that traverse it. Travelers crossing this state from the Cape Colony to Natal arrive at the top of the passes leading to the latter colony without a mountain being in sight, and then find themselves suddenly on the edge of an immense mountain-chain, with the coast region several thousand feet below them, extending to the Indian ocean. Immense herds of the larger antelopes formerly tenanted these vast plains, and are vividly described by capt. Harris, Gordon Cumming, and others; they are now fast disappearing. The diamond-fields recently discovered lie in this state, partly in Griqualand West, now British territory.

The land in the Orange Free State is very fertile. The difference of temperature in various parts of it renders it possible to raise tropical and sub-tropical products, coffee, sugar, rice, and cotton in some parts; while hemp, flax, and the vegetables of northern latitudes grow freely elsewhere. Tobacco and maize are largely cultivated, and fruits can be had all the year round. The climate of the state is very healthy, and that of the uplands, considering the latitude, is wonderfully cool. The houses of most of the inhabitants are little more than strongly built mud huts, very sparsely furnished. Total pop., 133,518.

The capital, Bloemfontein, is the only town of considerable size, and contained, 1881, 2,567 inhabitants. The other villages, or small towns, are on the increase. The Dutch Reformed church has about 20 congregations; the Anglican, Wesleyan, Lutheran, and Roman Catholic churches are also represented. There are 13 administrative districts in the state. The public income in 1883-4 was stated at £264,438; the expenditure at £268,671.

The history of the country forming the Free State may be summed up in a few words. Capt. Harris describes it, before 1836, as a howling wilderness, inhabited by wandering hordes of Bushmen and broken tribes of Betjouana and Zulu refugees from the armies of the great Zulu tyrants, Chaka. Dingaan, and Maselikutse. After the Kaffir war of 1835-36, a spirit of dissatisfaction arising in the minds of many of the frontier boers, an extensive emigration took place along the n.e. frontier of the Cape Colony; the majority of the emigrants, however, having Natal as their ultimate goal. However, after the British government had declared it an English colony in 1843, the boers again fell back on this region, and by degrees declaring their independence of the British crown, and forming a sort of Alsatia on the English borders, after some opposition, and one or two conflicts with home troops, the country was annexed by Sir H. Smith to the British empire, under the name of the Orange River sovereignty; and continued so until 1854, when Sir G. Clerk formally gave it up, and allowed the inhabitants to form a government according to their own wishes. The government is now in the hands of a president, freely elected by the Iandrost and heemraden in the several districts; while the volksraad, or peoples' council, exercise legislative functions. This state labors under the very serious disadvantage of being, like the kingdom of Bohemia, entirely inland, and has no port on the ocean at which customs dues can be collected; thus throwing the whole of the expense of government on local taxation.

About the year 1862 a large number of Griquas - a tribe who inhabited the south part of the state -- sold their farms to the Orange Free State government, and migrated in a body to the coast side of the mountains, occupying a large tract of country there known by the name of No Man's Land.

In 1866 a treaty was concluded with Moshesh, chief of the Basutos, by which a portion of the territory known as Basuto Land was ceded to the Orange River Free State. The boundaries agreed on by this treaty were, however, somewhat modified by the governor of Cape Colony in 1869 -- a significant fact.

The Dutch boers profess the Dutch Reformed faith, and speak a dialect of Dutch, mixed with Hottentot and English words. They marry young, and keep up, to some extent, nomadic habits. The roads and internal communication are good. Lime and timber are rather scarce, but building-stone and thatch abundant. Wooled sheep have increased amazingly within the last few years; and farms that 10 years ago would hardly fetch £50, now sell at from £2,000 to £3,000.